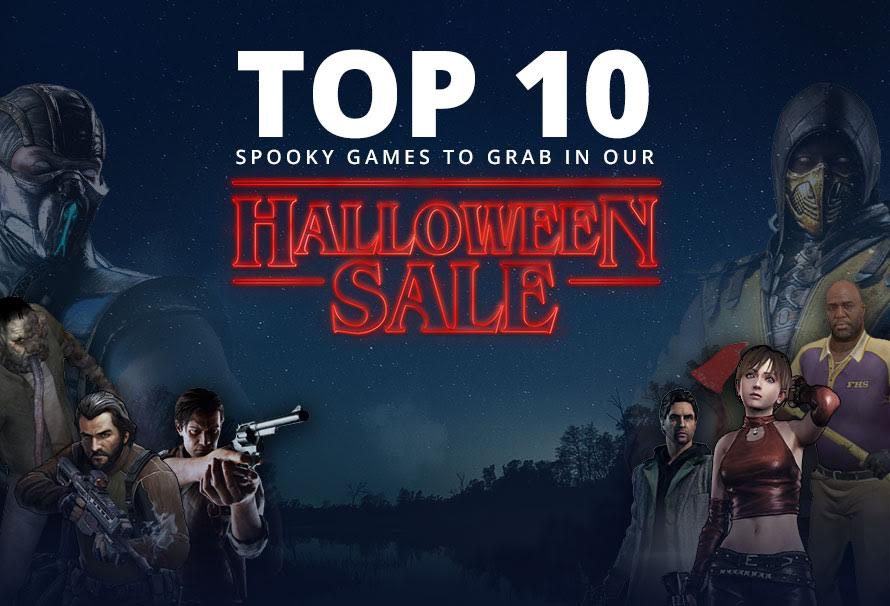 With ‘All Hallows’ Eve’ creeping up on us like a proverbial giant spider, we here at Green Man Gaming have a massive halloween sale running at the moment. This sale is HUGE! So huge in fact you may find yourself too many great deals. So we thought we would list the top 10 games to get your hands on during our spooky sale. We may have put some honourable mentions in too as this is sale is so big!

If massacring horde after horde of zombies is your thing then Left 4 Dead 2 is for you! This game shoves you and up to 3 friends straight into the middle of a global zombie outbreak. Your mission is to survive. This game boasts a vast arsenal of weapons and some pretty awesome locations, just make sure you don’t get too carried away and leave your team mates behind as they could be turned into zombie food.

Mortal Kombat and all out stomach churning gore go hand in hand like Pumpkins and carving, and in Mortal Kombat X the gore has been turned up to 11! Boasting a roster of over 20 characters to pick from, this is a fantastic game to play against your friends during the halloween period. If your friends are too busy trick or treating however there is a great single player mode to get stuck into as well.

You can also grab various savings in the Mortal Kombat series

The Evil Within will appeal more to survival horror fanatics as this is a brand new IP brought to you be one of the original creators of Resident Evil. The imagery and general theme of this game is pretty darn horrific. So if you’re like us and like to sit in a darkened room and torture yourself with jump scares and general stress, then this is the game for you.

Experience the Evil Within

The grand daddy of the FPS genre is back! It’s bigger, bloodier and crazier than ever! Doom is possibly one of the best first person shooter games released in 2016 and if you haven’t played it yet then Halloween is the perfect opportunity. Just make sure you are ready to fight the demons of hell, as they can generally be pretty grumpy.

Your express ticket to hell is right here

Here are some massive saving on other Doom games

Alan Wake: Collectors Edition (up to 75% off)

If you are after a more psychological horror game then Alan Wake is for you. Brought to you by the awesome studio behind the Max Payne, you play as Alan Wake, a horror author who has taken a vacation to the small mountain town of Bright Falls. Things start to go horribly wrong when his wife disappears and a novel he doesn’t remember writing suddenly comes to life. If this game teaches us anything, it’s that you should be careful when writing horror stories.

Jump into the pages of Alan Wake

Ever wondered how the whole Resident Evil story line started? Well your answer is right here with the remaster of Resident Evil 0. You play as Rebecca Chambers, a rookie cop who is sent out to investigate to series of strange murders and Billy Coen, an Ex Naval lieutenant who has been wrongly convicted. As the story progresses Billy and Rebecca learn about the T-Virus and experience the zombie outbreak first hand.

Experience the origins of the T-Virus

Surgeon Simulator: Anniversary edition (Up to 80% off)

While this is not the scariest game in our top 10 it is most definitely the most hilarious. The good news here is that you do not need any surgical experience to get the most out of this game. The added bonus is you can perform surgery on Donald Trump, so if you feel like the presidential candidate needs his lungs surgically removed then this game will be right up your street!

Ghostbusters: The video game (Up to 63% off)

If like us you feel that there is constantly something strange in your neighbourhood then we suggest becoming a Ghostbuster. While at the moment this maybe a physical impossibility then the next best thing is picking up the Ghostbusters Video game. As this game is a sort of sequel to Ghostbusters 2, GB fans will get a great kick from this game. If you are new to the franchise then this game welcomes you with open arms, it really is the closest thing to a real Ghostbuster you are going to get.

Check out the PKE readings

Fancy taking a trip to the middle ages? Fancy trying to survive a disease that wiped out nearly all of the human race? Welcome to The Black Death, a game where you have to survive the bubonic plague. It may seem quite depressing but it is a great immersive experience, it’s also a nice change from trying to survive an apocalyptic zombie virus.

The 3rd game in the epic F.E.A.R series puts you in the shoes of either Point Man (a genetically enhanced human being with the awesome ability to manipulate time) or the spirit of his dead brother Paxton Fettel (who also has telekinetic capabilities). As your progress through this creepy first person shooter you will be sucked into the games deep narrative and great gameplay. You will also experience some jump scares, so make sure you are well prepared and conscious of your surroundings both in and outside of the game.

Come face to face with Alma

Get some more deals on all of the F.E.A.R games

7 days to die (Up to 63% off) – If you think survival horror, crafting and world building are the perfect mix then 7 Days to Die is the game for you. Currently in early access this game combines all the elements a true survival horror game should have. Just remember, claw hammers can also be used as a handy weapon.

Mad Max (Up to 77% off) – The road warrior is back, and this time he is taking no prisoners in this post apocalyptic survival game. True he isn’t bathing in the blood of zombies but savage gangs of bandits can be just as scary.

Warhammer: End Times – Vermintide (Up to 54% off) – The best way to describe Vermintide would be the perfect mix between a Warhammer game and Left 4 Dead. Set in the iconic Warhammer fantasy universe, Vermintide is a co-op action FPS where the main goal is to survive the Skavin hordes

XCOM 2 (Up to 50% off) – If the threat of alien invasion is something your nightmares are made of then XCOM 2 is the game for you. It has been 20 years since the human race surrendered to the aliens and now it’s time to take our planet back.

So, there you have it, our top 10 Halloween sale games. These 10 (well 15 if you include our 5 honerable mentions) games are only barely scraping the surface of our massive sale. So click this link and see what other treats we have in store.