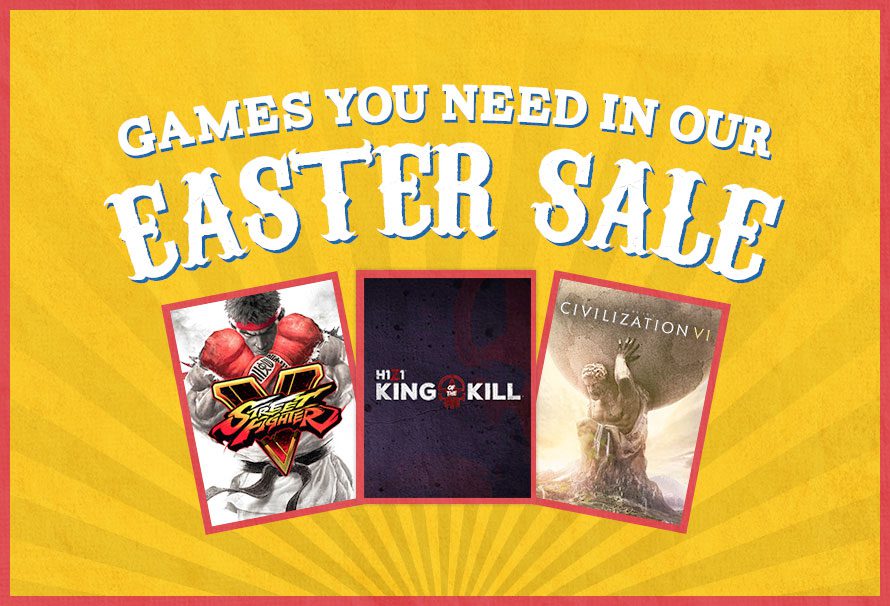 Easter is fast approaching which means two things! Time to eat our own weight in chocolate and play video games. Here at Green Man Gaming we have an epic Easter Sale going on right now, and here are the top 7 games you need!

The sequel to the magic wielding, first person action game not only gives you the option to reprise your role as Corvo Attano. Players now have the chance to choose to take on the role of Corvo’s daughter (Dishonored 1 spoiler alert) Emily. The Dunwall throne has been usurped and it is up to you to stop at nothing to take back what is rightfully yours, with brand new magical powers, weapons and game mechanics this is a great game to get your stealth fix.

In H1Z1: King Of The Kill the aim of the game is to become King or die trying! In this multiplayer online game you must survive against your opponents in a no holds barred death match to be crowned king! This is a fast paced shooter where every second counts on the battlefield.

The fifth instalment in the classic fighting franchise brings your favourite fighters back! With a full on cinematic story mode, plus a roster of growing characters, it can be argued that Street Fighter V is the best title in the franchise to date! Also when you pick up the game be sure to check out our handy guide to get your hands on some Fight Money Fast!

The sequel to the epic Deus Ex: Human Revolution sees you jump back into the augmented boots of Adam Jensen. The year is 2029, and mechanically augmented humans have now been deemed outcasts, living a life of complete and total segregation from the rest of society. Building on the franchises awesome gameplay Mankind Divided adds more features and story to the in depth cyberpunk universe.

If building up empires from the ground up is more of your bag then Civ 6 is perfect for you! Since it’s release the game has undergone some tweaks and has released some DLC so now is the perfect time go grab a copy. So if you think you have what it takes for world domination and to take on the likes of Poland and the Viking uprising (not in the same story sadly) then this is the perfect time to jump in.

Survival Horror has returned to the Resident Evil franchise. Take on the role of Ethan as he explores the horrors inside of the Baker household in order to find his missing wife. Watch the terror unfold in front of you and experience survival horror at its best!

There are a lot more titles to grab in our Easter Sale! Make sure you check out the other great deals we have here!