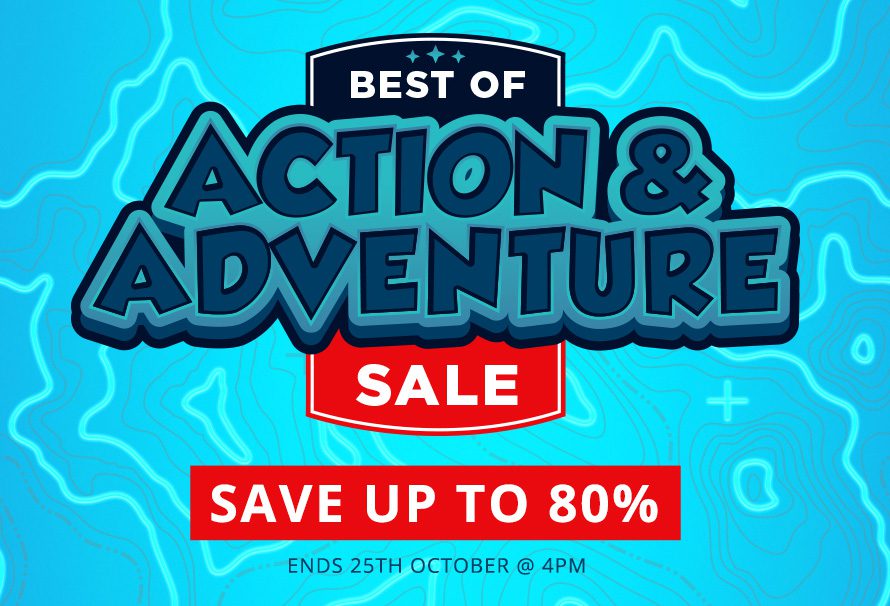 That’s what we’re offering you here, our Action and Adventure Sale has started, giving you better prices on a massive range of games that feature action and adventure.

But you don’t want to browse the whole list, you want a few picks chosen out for your visual perusal. Onto the list:

What’s more patriotic than heading down to Montana, grabbing a gun, and spreading freedom? Nothing, and that’s why Far Cry 5 is the most patriotic of videogames ever made. Well, probably. Either way, it’s a huge sandbox of fun letting you spread mayhem one bullet at a time.

A literal sandbox this time, Conan Exiles is set in a barren wasteland where survival is the name of the game. Starting with nothing other than a loincloth (if you’re playing the non-nude version) you have to craft, fight, and learn how to survive in this prehistoric savage land.

Action RPGs in the style of Diablo don’t come bigger and more Greek than Titan Quest. With thousands of weapons, enemies, and a huge section of the Mediterranean to explore and slay in, Titan Quest is a massive proposition. There’s also a freeform class system, allowing you to put points wherever you like and build your character your way.

The Gothic series is one of the gaming world’s toughest and most rewarding RPG series, and ELEX is the next from the series’ creators. ELEX is a post-apocalyptic RPG that has a large open world to explore, filled with mutated and twisted post-apocalyptic creatures. Definitely worth checking out if you’re in the mood for something a little tougher than the normal fayre.

Darksiders asks the question ‘what if the Legend of Zelda were turned up to 11’ and Darksiders II asks that question but even louder. Taking on the role of Death, the rider on a pale steed, during the events of the previous game. It’s got sprawling dungeons and classic hack ‘n’ slash combat, and it’s never anything other than full of style.

Live your best life as a soldier during the medieval period, but without the permanent death and being crushed under the feudal system. This multiplayer game has been a smash hit from release and shows no signs of slowing down now. Grab a weapon and get in the melee, your lord needs you!

Everything’s fine above the surface, but when Sachi descends into the underworld to find her son, things aren’t exactly so fine. Smoke & Sacrifice is an open world narrative driven RPG where you delve deep into the earth to rescue your child.

The king is dead, long live the people. In response to the power vacuum, the queen has put out the call for the citizenry to rise up and stem the tide of doom that’s coming. An intriguing mix of RPG, strategy. and roguelike, For the King will help you stem the chaos.

The next game in the Heretic Kingdoms saga, Shadows: Awakening is an isometric RPG with a focus on real time combat. Evil demons are absorbing souls, stealing people’s memories. So someone has to stop them, and that someone is you. Well, you and a group of hardy adventurers, of course.

Midgard is calling, inspired by the Vikings of the North, this game sees you facing off against the Jotan who are returning during the coldest winter as legend foretold. As clan chief you and the Wolves of Midgard, your band of fierce warriors, will carve out your own destiny in this frozen world.

The original Outcast was heralded as a game changer, but due to advancing technology it’s not always been the easiest to get running. Outcast – Second Contact is the complete remake and does absolute justice to this classic. With brand new graphics and a whole world to explore, Outcast – Second Contact is a game well worth trying if you’re interested in anything adventurous.

SEUM: Speedrunners from Hell – 74% Off

If speed and frenetic action is your name, then SEUM: Speedrunners from Hell is your game. The developers describe it as the ‘world’s only competitive heavy metal first-person platformer’ and honestly we don’t think we can describe it any better than that.

The Action and Adventure sale will be running until the 25th of October.